Some features may be broke, sever upgrades where not smooth…

A little history and information about Granby Consolidation Mining at Anyox, BC

Anyox is Canada’s largest ghost town that was operated by Granby Consolidation Mining from 1914 until the mines closed in 1935, primarily as a copper mine and smelter. The bulk of the original town has been destroyed; when the mine closed much of the town was salvaged. Then in 1942 a major wild fire burned most of the wooden structures down. The mine was largest producer of its time, in 1925 Anyox produced 38,207,434 pounds of copper! The actual claim originates from 1898, it was primary a copper mine but also had gold and silver. On July 31, 1935 the mine closed due to a few issues compounded. Minor strikes due to lower pay request with the prices of copper falling from the great depression and by an attempt to blast two open pit mines together to get the ore cheaper. The original open pit mine was called the “” hole”, 10 A.M. on November 27, 1934 whistles sounded for the largest explosive blast ever for the time. The method for estimating the explosive required for the blast was still experimental and too much was used. The blast not only shattered the ore, it collapsed many of the tunnels and fractured the rock surrounding the area making it unsuitable for tunnel mining.  The tunnels under the glory hole at the deepest part of the mine where re-purposed to haul the ore out using the existing infrastructure to the town for processing where destroyed. For a much more in-depth read on the history of Anyox, check out this page! A guy named Frank Schlichting runs a Facebook group here, for his and other mine explores and to go on adventures with him! He has a vast YouTube Channel here with his videos of exploring abandon mines from all over! He has several small series on the Anyox mine and Gramby mines. The one embedded below this is his very best of, very good watch! I highly recommend you watch and check out his group and channel.

Residential part of the town:

At its peak the town was home to 2,500 to 3,000 people. Company built home where provided to all of its workers. The workers lived here tax free, paid by the company, with wages above the average for the work during this time period. Although the workers did pay rent, it was well below the cost of any comparable town. Utilities where included in the rent. The town had 2 sections for homes, flats adjacent to the mines and the slopes. Most of the mine workers lived in bunkhouses with the food and laundry provided by other workers. Some did live in family apartments and small single story homes. The nationalities of the workers where quite varied, some articles point to 15 different nationalities working at the mine.

The white collar workers, shop keepers, plant workers and other upper management lived up on the hill in 2 story cookie cutter style homes. The largest homes where for highest ranked employees.

The town had 3 churches, a school, hospital, emergency room next to the mine, machine shops, and general stores, hotel, cemetery all on site for its residences.

A well known story is the “Stolen” light bulbs. These where company light bulbs that had been etched to discourage employee theft of them; stories indicate this had little deterrence effect and some displayed them proudly in their windows. These are often prized fines of modern explores of the area. 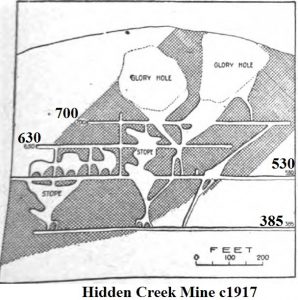 ” The Hidden Creek mine in its initial development was opened up by six tunnels—namely,
the 150, 230, 3S5, 530, 630. and 700, which numbers are identical with the respective elevation of
each tunnel-level above sea-level. Fifty thousand feet of diamond-drilling was done prior to and
contemporaneously with this first tunnel-work. The diamond-drill cores established the general
outlines of the ore-bodies, and the tunnels served to develop them for mining at the most advan
tageous points. The haulage-tunnels are the 530, 3S5, and 150. The G30 and 700 were driven
to prospect the ore-body No. 2 and are now used only as stope manways. The 230 level is used
as a crusher-level only. On this level ore from the upper levels is crushed and dropped directly
into pockets extending to the i50 level, where it is drawn into railway-cars for shipment to the
smeltery.
” Mining consists of open-stope or milling methods underground, and ‘ glory-hole ‘ or open-cut
work near the surface. Stoping was started first on the 530 level, extended to the 030 and 700
levels, and thence to the surface. These first stopes served as pockets from which the ore broken
above was drawn. By extending several stopes to the surface and widening them at the top,
two glory-holes of considerable size have been formed and are now being worked In ore-body
No. 2. An equal number has been developed in ore-body No. 1.
” The ore drawn from chutes on the 530 level Is transferred to pockets extending to the 3S5,
from which It Is delivered to the crusher-bins. Several raises have recently been completed
from the 385 level, into which all of the ore from the glory -holes in ore-body No. 2 runs direct,
thus eliminating the transfer on the 530 level.
“A departure from the general mining methods is being made below the 385 level, which
do not outcrop and have, a heavy overburden of rock to carry. In such places a system of
shrinkage stope is being developed which will give more support to the back and walls and
make working conditions safer. The method adopted in a section now under way consists of
shrinkage stopes 125 feet wide, with a length equal to that of the ore-body. Vertical pillars,
40 to 50 feet wide, also across the ore-body, are left between stopes.
” A mauway rise is driven through the centre of each pillar to the surface, or to other
workings opening to the surface. These manways serve for ventilation purposes and as
entrances to the stopes. Manway drifts are driven from the pillar raises into the stopes at
vertical intervals of about 30 feet progressively as the raises are advanced upwards. Drifts
are driven under the stopes, and chutes are distributed so as to draw evenly the ore broken
In excess of requirements for headroom In the stopes. Each chute Is equipped with a bulldozing chamber cut in the solid and without timber, as shown in an accompanying illustration. The
manway to this chamber is equipped with an air-line for use In drilling boulders.
” Electric Haulage in Granby-type Mine-cars.—The present haulage system is equipped with
75-cubic-foot, 24-inch gauge, Granby-type cars, of which there are fifty-four in use, and Ave 6-ton,
500- volt Westinghouse bar-frame locomotives. On account of the recent increase in smelting
capacity a change is being made in the haulage system on the 385 level, which handles the total
output to the crusher-bins. Thirty ears of 140-cubic-foot capacity and 36-Inch gauge, and also
two 12-ton Westinghouse locomotives of the bar-frame type, for pulling trains on the main line,
are being installed; and two of the 6-ton locomotives are being altered to fit the wide gauge
for switching purposes underground. The rails used with the light equipment weigh 30 lb. per
yard, while the new track is being laid with 45-lb. rails.
” A duplicate crushing plant has been provided, so that either piant can take care of the
maximum output. Crushing plant No. 1 is installed underground on the 230 level. Three crudeore
pockets extend from this level to the 3&5 and receive the run-of-mine ore from that point.
This ore feeds directly into the crusher, from which it can be diverted Into either of two pockets
extending to the 150 level. The Bacon Farrel crustier used in this installation has a solid-cast
frame and a crusher opening 36 x 42 inches. The crusher is belted to a line-shaft directconnected
to a 150-horse-power, 2,000-volt, Westinghouse alternating-current motor. Crusher
Xo. 2 is installed at the surface below two ore-bins of a capacity each of 250 tons. The ore
from these bins is fed directly into the crusher, from which it goes into pockets also extending
to the 150 level. The crusher at this point has a cast-steel sectional frame with a 30- x 42-inch
jaw opening, and it has a drive similar to that of the No. 1 crusher. The ore is crushed to 8
Inches, which is the size required by the smelting-works.

There where 5 ore bodies on the mine. Each one had a different composition that allowed a lot of the ore to be smelted on site with minimal imports. Allowing the town to even more self sufficient.

” Ore-bodies Nos. 2 and 3 occur in the schist area and both have an extensive outcrop.
The average elevation of the outcrop of those ore-bodies is 800 feet, and their continuity is
established down to an elevation of 350 feet. Ore-body No. 2 is a lenticular body about 400
feet wide, 300 feet thick, and 700 feet long, outcropping at the southern end and pitching to
the north at about 45 degrees. Ore-body No. 3 is much smaller and Is situated north-west of
No. 2 and geologically in the same area.
” The ore constituting ore-bodies Nos. 3, 4, and 5 is essentially a massive sulphide, although
in some parts of these ore-bodies siliceous zones with disseminated sulphides are found. Orebodies
Nos. 2 and 3 have disseminated sulphides in a schistose gangue, with an occasional small
lens of massive sulphide ore. There Is little evidence of oxidation or surface enrichment in the
ore-bodies, and unaltered sulphides appear at the surface. In Table II. is shown a general
analysis of the ore-bodies established by underground development-work and diamond-drilling.
In mining, calculated proportions from each ore-body are taken to make a mixture most desirable
for smelting.

Much of the ore was removed from the mine via trains on 150 level; bulk of them are electric. From the rail it could go to ore bins, a rock crusher or barge. Typically it was processed on site and smelted to sold as copper and shipped out. They also imported silver and other ores and fluxes to process materials. 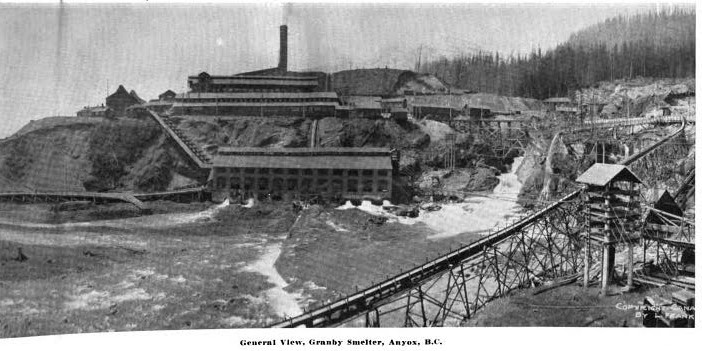 The whole smelting site operations was incredibly large; especially for the time and remoteness of the town.

The pictures just do not do it justice on the scale of operations that are taking place!

The smelting building pictured above, top of photo; the large building in the center is the power house.

Below is the blueprints of the building with some of the actual pictures of the components directly below it in semi-relation to the print. 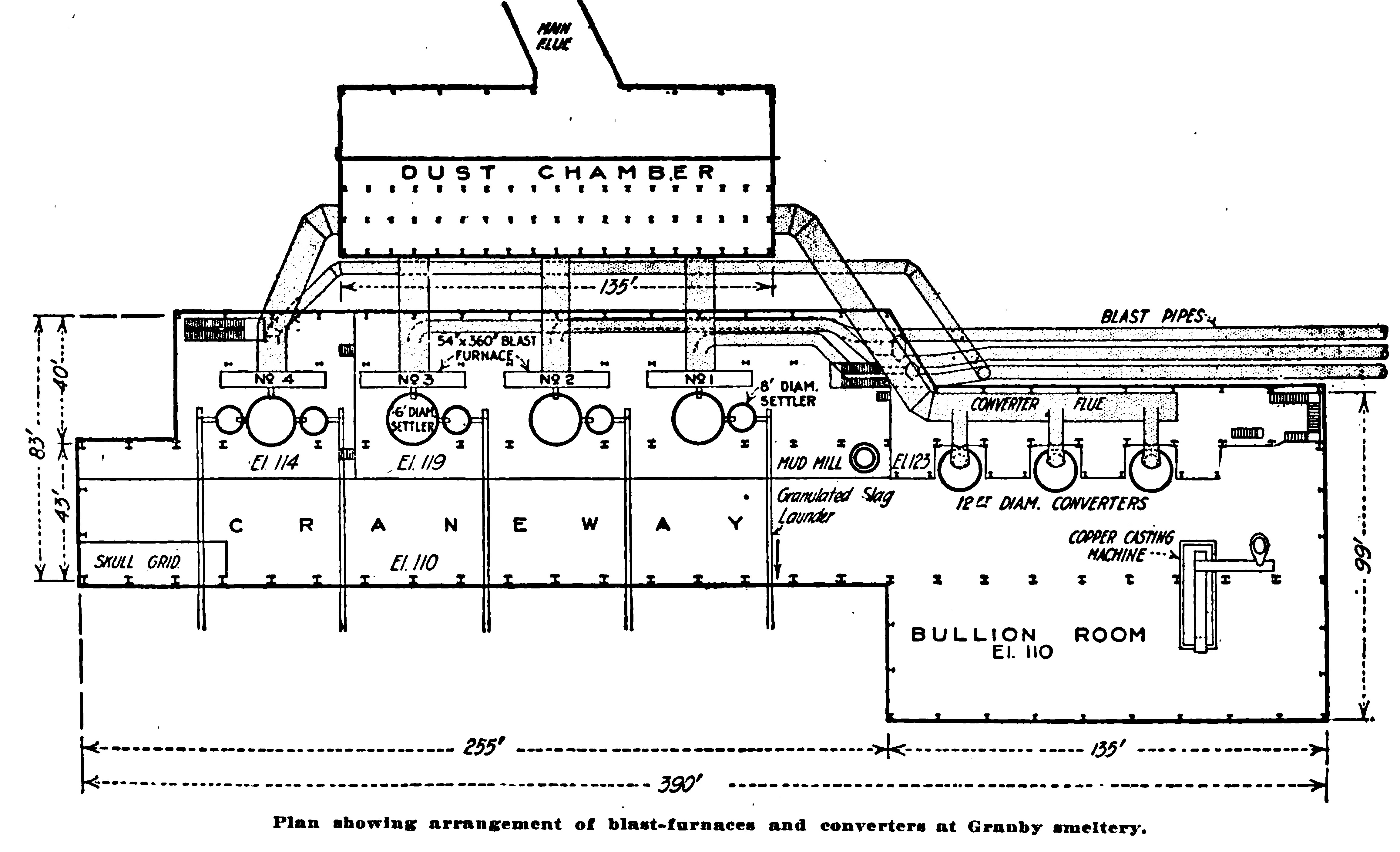 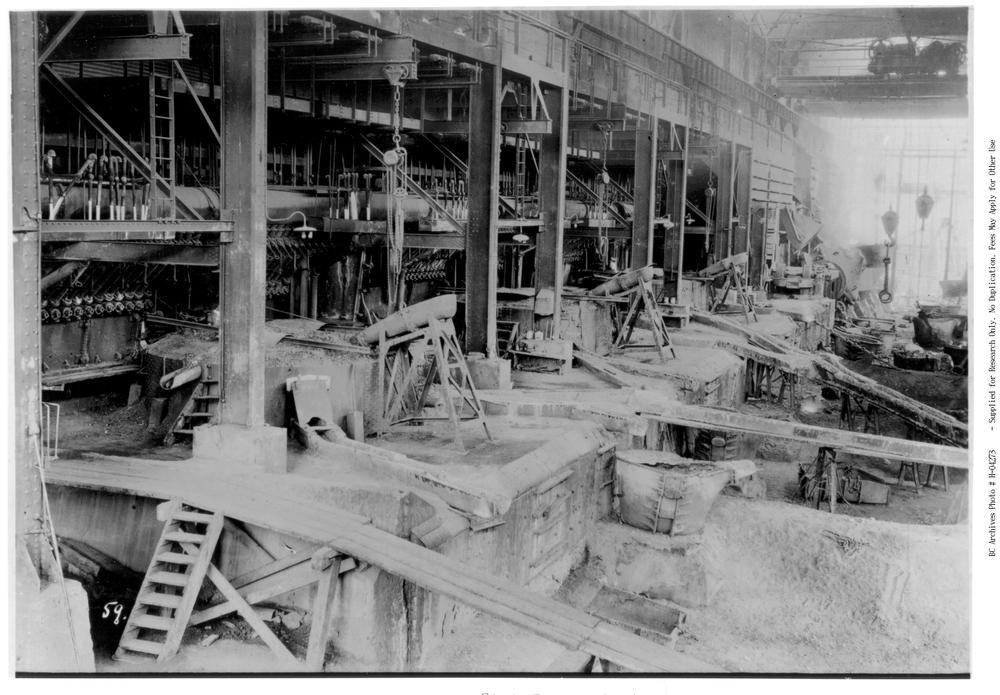 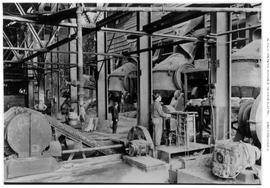 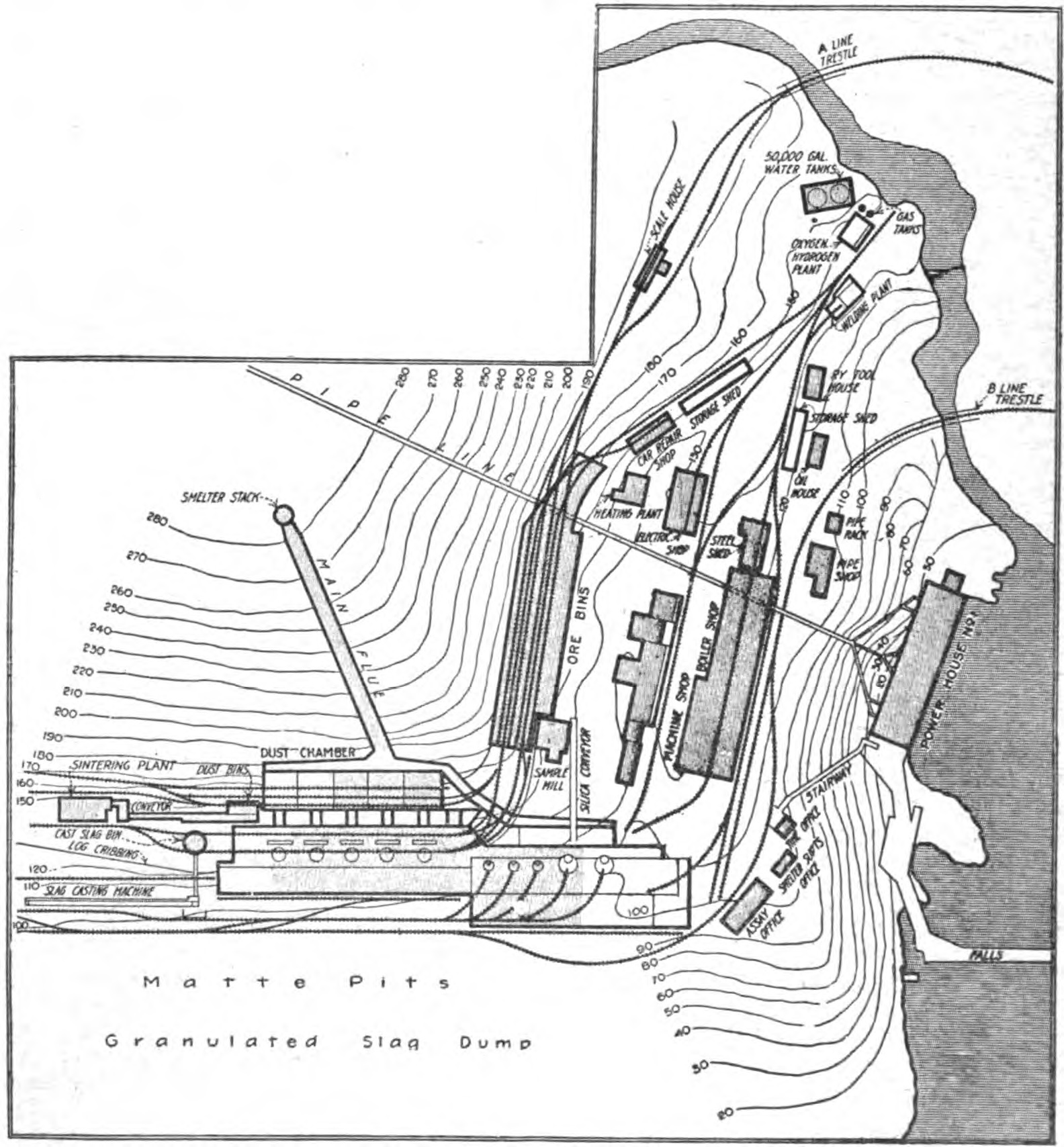 Read more on the smelter ->

On July 13, 1921 the smelter caught fire. As of writing this I do not have a cause or injury report. Smelter is top of photo, power house bottom right. 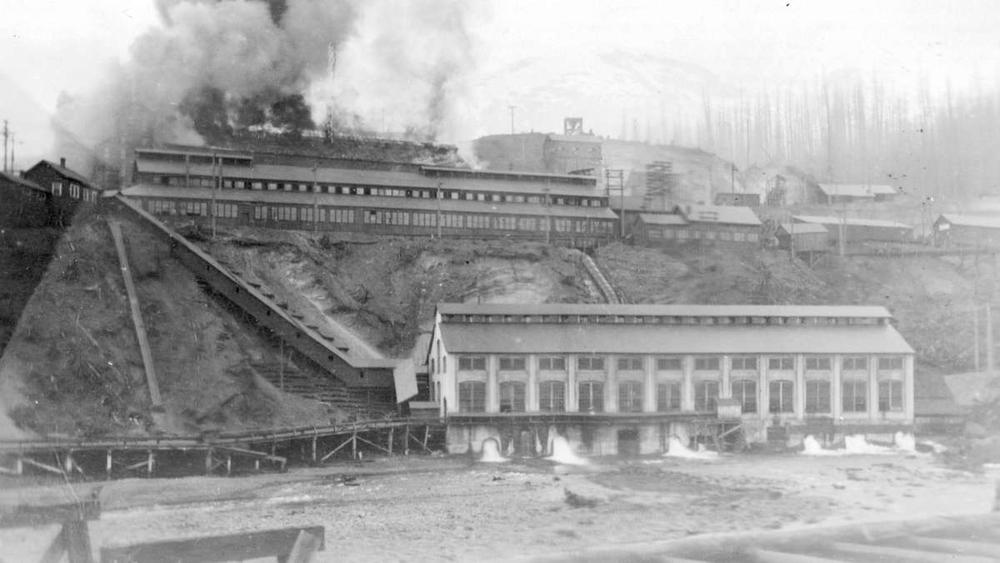 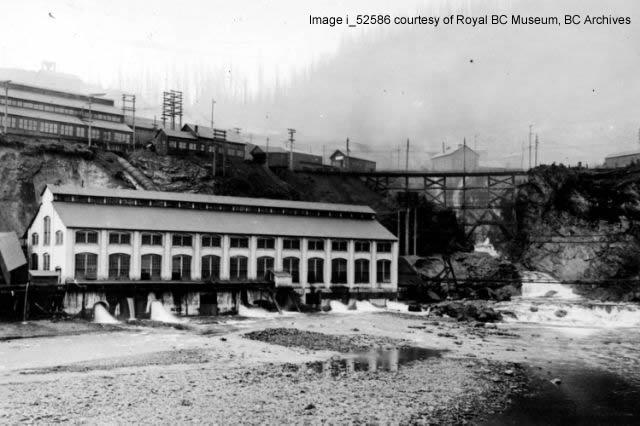 Power Plant #1 was responsible for all of the towns power and most of the air to run equipment. It had 9 control panels in it for the several power sources it housed. The pen-stock had an effective head of water of 375 feet giving it a nominal 165 psi of hydraulic pressure to drive the plant. 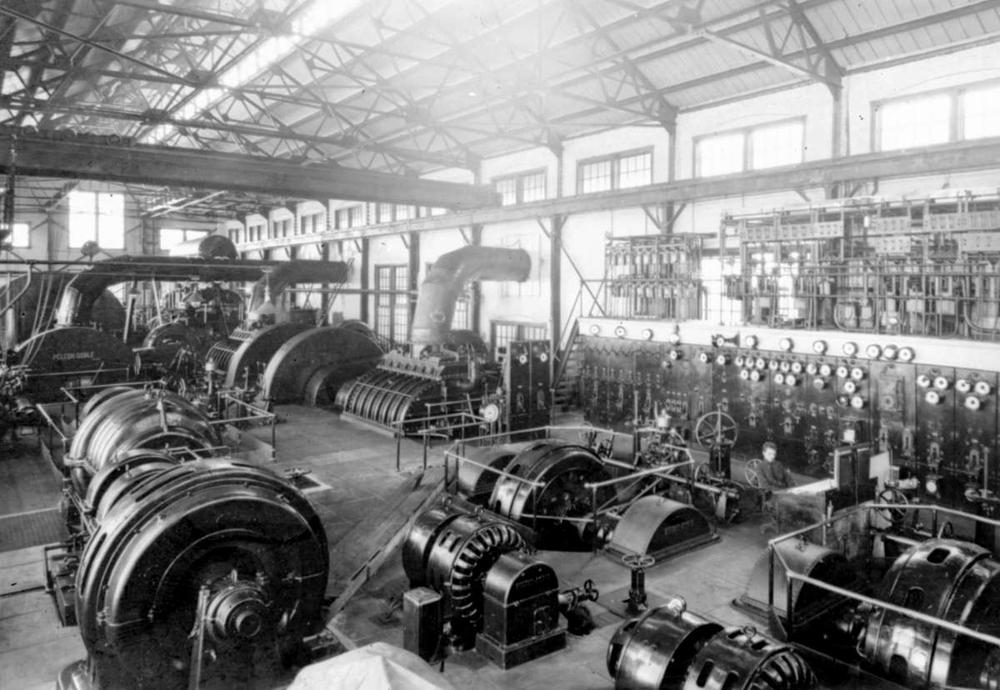 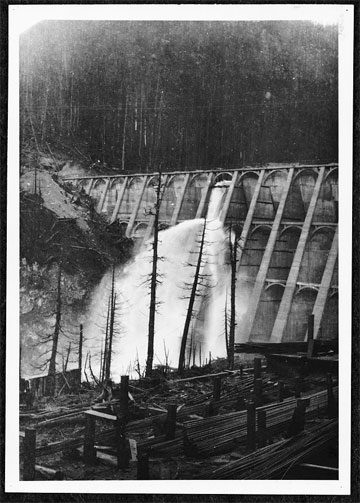